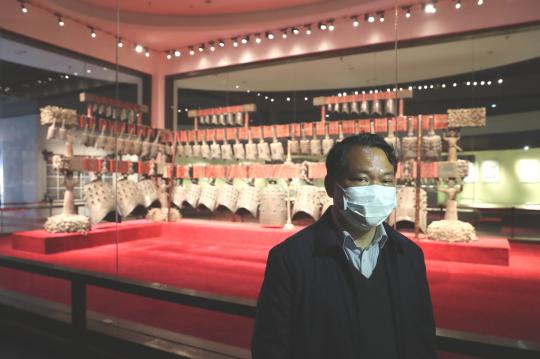 Fang Qin, curator of the Hubei Provincial Museum, stands in front of the bronze chime bells of Marquis Yi dating back to the Warring States Period (475-221 BC), on Sunday. WANG JING/CHINA DAILY

It has become a habit of Fang Qin, curator of the Hubei Provincial Museum, to carry a bottle of hand sanitizer wherever he goes.

Fang, like other residents in Wuhan-the city hit hardest by the COVID-19 outbreak on the Chinese mainland-had spent more than two months in lockdown.

What made him different, though, is that he did not spend that time at his home, but rather at a small house near the museum's front gate.

He and his 75 colleagues have become the protectors of more than 240,000 cultural relics at the museum, and thanks to their efforts, all relics have remained safe throughout the epidemic.

"We have been fighting two wars: keeping all museum staff safe from COVID-19 and making sure nothing happens to its 240,000-plus cultural relics," Fang said.

Among the museum's treasures, a set of 65 bronze chime bells, which dates back 2,400 years to the time of Marquis Yi of the Zeng state, is probably the museum's best-known exhibit.

On Jan 23, Wuhan was put under lockdown to curb the spread of COVID-19 and the museum was closed to the public.

To further limit the risks of spreading the disease, the museum reduced the number of essential employees on site from more than 200 to 75 and went into total lockdown on Jan 27, meaning no one, including museum employees, could leave or enter the museum.

They took shifts to monitor the surveillance cameras trained on the Marquis Yi chime bells and other key exhibits around the clock, Fang said.

They also had to secure the warehouses, go on patrols, mitigate fire risks, ensure supplies of electricity and water and conduct frequent disinfections, he said.

Sitting in front of the chime bells of Marquis Yi for an interview with China Daily, Fang could recall vividly every major moment of the COVID-19 outbreak in Wuhan.

He had kept a diary to carefully record his daily tasks and every donation he received during that time.

Among them, the National Museum of China in Beijing donated 5,000 masks and the Shanghai Museum offered 4,000.

"The diary became a good way to avoid panic and maintain confidence," he said.

Fang returned to the museum to work with his staff on Feb 13. Before that, he spent a lot of time online keeping abreast of the goings-on at the museum, and once he returned he decided to stay at the house near the front gate to isolate himself from the staff.

"After the lockdown, the museum became a confined space, and if I were infected with the disease, it would put the whole group at risk and I wouldn't be able to find replacements for them in time," he said.

Liu Jiabin, vice-director of the museum's security department, said one of his colleagues has stayed at the museum for more than 100 days.

"Living at the museum became very difficult as food began running out in mid-February," Liu said,"The only things left were noodles and rice."

The museum is only 2 kilometers from Zhongnan Hospital of Wuhan University, which had admitted many severe and critically ill patients, Fang said.

"Ambulance sirens kept roaring, and the sound kept me awake all night," he said.

"There were many such psychological challenges. We were on the edge of being crushed by bad emotions. The only way out was to just keep going."

On March 22, a livestreamed broadcast offered a virtual tour of national treasures housed at the museum, attracting more than 10 million netizens.

"After closing for 60 days, the exhibition hall was opened. Although we could see the exhibits through surveillance, we could not see them face-to-face. It was like video conferencing," Fang said.

He said he spoke to the exhibits as he walked by.

"How have you been? I am sorry I did not come to visit you for so long."

When the lockdown was lifted in Wuhan on April 8, Fang got up at 6 am and took a selfie with the museum in the background.

"The sun had risen. I took a deep breath and let myself relax a bit," he said. "I noticed the grass on the cracks of the marble floor had sprouted up, but we did not cut it. The green grass is much better than the bare trees I saw when I returned two months ago."

After the lockdown was lifted, the museum set up a rotation of staff so that some of them could return home.

"I'll stay here until the day we open the doors again," he said.

Many museums across the country have started collecting artifacts related to the outbreak, Fang said.

"Together, we will hold a large exhibition to remember this unique period of time," he said.

Liu Kun contributed to this story.