Number of domestic virus cases now fewer than 100 in country 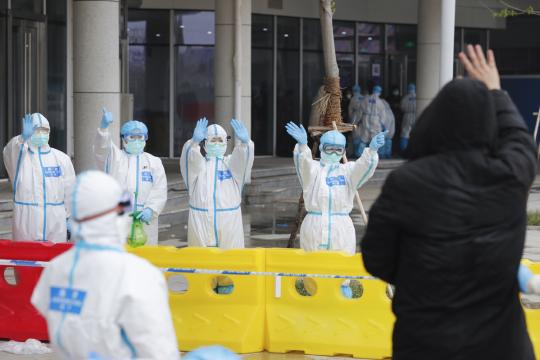 'Significant progress' seen as over 1,000 patients from overseas leave hospitals

China has reached a significant milestone in its battle against the COVID-19 epidemic as the number of locally transmitted infections nationwide has fallen under 100 and Hubei province's Wuhan, the city hit hardest by the disease, has no remaining cases at its hospitals.

The National Health Commission reported three new confirmed cases on Sunday, with two coming from overseas. A total of 723 confirmed patients were receiving treatment as of Sunday, including 627 cases involving people arriving from abroad.

That has brought the number of existing domestic cases in the country to below 100, commission spokesman Mi Feng said on Monday. He added that more than 1,000 patients who had arrived from overseas have been discharged from hospitals as of Sunday, showing that "China's epidemic control efforts have achieved significant progress".

In Wuhan, all infected patients have been cleared of the virus as of Sunday, and the city is rushing to restore regular medical procedures to meet the demands of the public while maintaining vigilance over a potential rebound of the disease, according to the commission.

Wu Zunyou, a chief epidemiologist at the Chinese Center for Disease Control and Prevention, said some patients in Wuhan have been cured of COVID-19, meaning they tested negative for the virus and their CT scan results were normal, but they remain hospitalized for treatment of chronic diseases or complications arising during previous therapies.

Nearly 1,000 asymptomatic individuals who are infected but display no symptoms are still under medical observation in China. On Sunday, 25 new symptom-free cases were detected, including one arriving in the country, the commission said.

Increasing infections in neighboring countries are also posing risks to the domestic situation, according to officials.

China has registered 107 locally transmitted cases that were associated with imported infections since March 21, accounting for 88.4 percent of the total domestic cases recorded during the period, said Wang Bin, an official with the commission's disease control and prevention bureau.

In addition to Heilongjiang province, which has seen a large number of infected people entering from Russia, recent outbreaks in South Asia, including in India and Bangladesh, have alerted the border regions in Yunnan province and Guangxi Zhuang autonomous region in southern China, where 80 percent of the country's border crossings are taking place, Wang said.

"Given the scarce and inadequate medical resources in these border regions, the commission sent an expert team on April 21 to provide on-site guidance in Yunnan, Guangxi and the Tibet autonomous region and help local officials formulate targeted virus control plans," she said.

The National Immigration Administration has also intensified cooperation with immigration authorities in neighboring countries by stepping up information sharing, conducting joint patrols and inspections and accelerating repatriation of illegal immigrants to curtail the spread of the virus, said Liu Haitao, head of the administration's border inspection department.

Because the virus has forced domestic and foreign airlines to dramatically reduce flights, China has also been arranging chartered flights to bring back its citizens.

About 900 Chinese citizens, the majority students studying abroad, will board these planes.

Last week, four flights were arranged to carry 854 Chinese, including 711 students, back from the US, the UK and Italy, Han said.