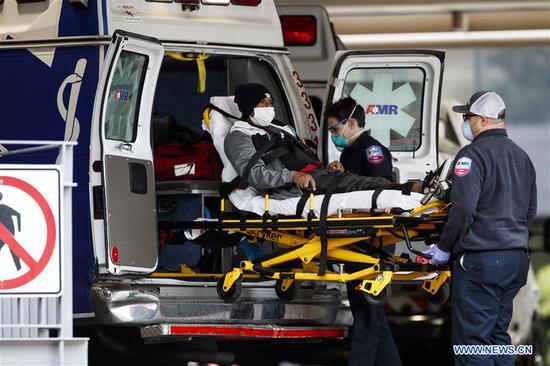 Medical workers carry a patient from an ambulance to George Washington University Hospital in Washington D.C., the United States, on April 27, 2020. (Photo by Ting Shen/Xinhua)

A research team led by the Yale School of Public Health recorded an estimated 15,400 excess deaths than reported, nearly two times as many as were publicly attributed to COVID-19 in the early weeks of the coronavirus epidemic, suggesting the death toll from the pandemic is significantly higher than what has been reported and indicating the U.S. state public health departments failed to capture the full impact of the pandemic.

The excess deaths occurred during March and through April 4, a time when official numbers of coronavirus deaths was 8,128. The analysis, calculates excess deaths by using a model to estimate how many people probably would have died absent the pandemic, and then subtracting that number from the overall deaths reported by the National Center for Health Statistics (NCHS).

The excess numbers of people died from COVID-19 include those who died of the epidemic but not from the disease. For example, some people died at home without being confirmed and some died because they were afraid to seek medical treatment for unrelated illnesses. The number also affected by increases or decreases in other categories of deaths, such as suicides, homicides and motor vehicle accidents.

The 911 call data suggest a spike in the numbers of people dying at home, making them less likely to be tested for the coronavirus and included in the official death counts.

And as of mid-April, paramedics for the Chicago Fire Department were seeing about four times as many calls as usual in which the patient is beyond resuscitation and pronounced dead at the scene, according to the spokesperson Larry Langford.

The incomplete official numbers, which were widely cited at the time, failed to inform policymakers and the public to understand how the epidemic is evolving and how severe it is in different places when they're relying on the data to make critical decisions, according to Daniel Weinberger, a Yale professor of epidemiology and the leader of the research team.

Heath experts say reporting lags and the fact that authorities initially counted only cases and deaths through tests, which in many countries are insufficient, hindered the public to understand the scale of the pandemic.